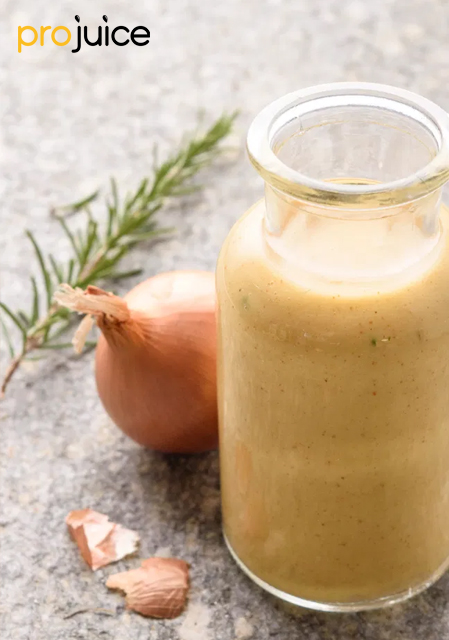 Our recent 1st of April social post and email about a new onion smoothie has got us thinking about weird and wonderful unique smoothie flavours. Okay so I think we can agree, an onion smoothie is never going to be a commercial success.

However flashback 15-20 years and few would have predicted a kale and lemongrass combo (Green Reviver) would be one of the top selling smoothies on cafe menus up and down the country, or a smoothie containing basil, lime and avocado (Super Green) would be a popular choice for many.

Taste buds evolve and trends come and go so who knows – maybe in 2031 we’ll all be enjoying an Onion Odyssey smoothie!?

Our unique Ginger Beets smoothie combines Beetroot and Ginger, the thought of which repulses some people but those who like it…really like it!

In the Projuice testing kitchen we have sampled and experiemented with many unique smoothie flavours over the years, some work and some most definitely do not!

We’ve recently be working on a sweet potato and chilli blend…testing is ongoing…we’ll ummm…..keep you posted!

We thought it might be interesting to see what other crazy concoctions are out there in the world. We spoke to some of our customers and scoured the web and we’ll leave it up to you to judge – delicious or disgusting?

This seems to be a growing trend – sounds pretty disgusting right? However it freezes well, its quite creamy and it’s not too overpowering. Maybe one to start investigating. Check out this Cinnamon Bun Cauliflower recipe!

One for the foragers – this smoothie uses ingredients found in any British hedge or roadside and is apperently super good for you. We’re not 100% sold on this yet and wondering whether it would it sting our tounge?! Willing to try in the pursuit of taste though! Recipe here Dandelion and Nettle Smoothie!

Yes – this was apparently a thing. Way back in 2007 this drinkable rotten cheese was first sold by Moo Juce in Brighton and shockingly offered in four variations including blended with peanut butter or Jamaican ginger cake to spice up the fermentation factor!
I don’t think it caught on!

Smoothies made with syrups or powder
Okay so we’re obviously a little biased but the proof is in the pudding (smoothie). There really is no comparison between our 100% fruit and veg smoothies and some additive heavy gloop out of a bottle! Our smoothies contain nothing but frozen fruit and vegetables. All contained in convienient little single serve sachets. No need for ice. Simply blend with 200ml of juice for a thick luscious refreshing smoothie. Available in 16 flavours – some more unique than others! See the range